New Zealand therapist David Grove pioneered the ground breaking technique of Clean Language while working with trauma victims during the 1980s. He discovered that the most effective way of freeing patients from the effects of their trauma was by asking the patient to describe their feelings in metaphor. Over a period of years, he identified 9 questions that would least influence the client in their metaphorical journey, hence the term 'Clean Language'. The technique was witnessed by therapists Penny Tompkins and James Lawley, who devoted the next 3 years to modelling David's techniques into a methodology, Symbolic Modelling that could be taught to and practised by others.

David has since developed his work through Clean Space (moving clients on by literally moving them around in space) and Clean Worlds (which explores the boundaries between spaces). His newest concepts revolve around the concepts of 'emergent knowledge' and 'six degrees of separation'.

The theory of the six degrees of separation comes from the study that showed that mathematically, among the billions of people throughout the world, there is a probability of finding a connection within 6 people. Therefore, it should take a therapist, on average, six spatial moves to find the link that leads to a solution.

The key to the linkages are the weak ties between the logical steps that one would normally take to find an answer. The weak ties are like short cuts to

the solution. For example if there are 50 points on a circle, you would imagine you have to go through each point to complete the circuit, but if there are a number of weak links in the circle where one vaguely knows another, then all of a sudden you can jump to a place where you only have two more points to reach the end instead of 40. This type of network is created by weak links such as some offhand or obscure remark which, if picked up on, can take a client to the 'sweet spot' of a new perspective and a solution which might not appear if the most obvious line of enquiry were followed. The key is for the facilitator to use simple iterations over and over again in order to guide the process until a network solution occurs.

Starting with space of A, space of C, space of B, space of D and space of f as drawn in this diagram, with Σ representing Emergent Knowledge: 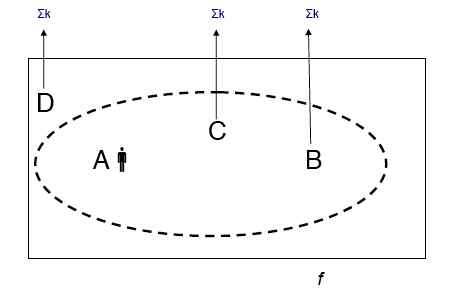 Wait while the person adjusts the position and repeat the sequence five more times or until they are absolutely positive that the spatial relationship of A, B and C is correctly established.

Note that addressing the questions 'to B' or to another space means that questions addressed to A, the client, are directed towards the knowledge that the client can access from spaces B and C.

The key to running this process effectively is for the facilitator to focus on asking questions of the spaces of B or C etc, through the client, rather than of the client per se.

4. Epistemology: establishing knowledge around A, B and C

(Note: Do not address any questions to the content as none of what A knows at this point, in this space, is emergent knowledge).

To B: 'And what kind of statement, object, goal, problem etc could that be?'
B answers
To B: 'And by what name would the object or statement at B like to be called?'

(Proceed with the next questions using that name)

(The answer must come from the space of B, not from A's interpretation of B, otherwise the knowledge will not be emergent. B's answer should also surprise A.)

To B: 'And is there anything else that [name] knows from that space ... there?'
B answers

We first need to get a metaphor (ie a name of an object that you can draw, not an adjective describing a feeling).

To C: 'And what kind of space is the space between you and B?'
C answers
To C: 'And is there anything else about that space?'

Persist until there is a suitable name to call the space. Then proceed with the next questions.

You will by now have begun to emerge new knowledge from B, C and D, independent of the client at A's knowledge. You can now check how this has changed their experience by comparing it with the original statement at A.

Questions to A - second time:

5. Six degrees of freedom (towards an emergent network solution)

The idea of six degrees of separation suggests that we are linked to any other person in the world through a small world network of six other contacts. This next procedure will set up six different points of view that A can move to which will then create a network resolution that will change the perspective of the initial problem or goal. Now, this may often be accomplished after A has moved between five and seven times. The objective is to find a sweet spot – a space in which all these knowledge spaces emerge together to create a substantial experience both cognitively and emotionally. You can recognize the sweet spot by the reluctance of A to move anywhere else and a great deal of philosophising about the nature of the experience.

To A: I am going to ask you some questions that will ask you to find another space somewhere in the room or outside, which your intuition will guide you to and give you a different point of view.

To A: And what do you know ... now from that space ... there?
A answers
To A: 'And is there another space that you could go to that also knows about [the last thing they said] ?'

Wait until they move to the new space, which we shall refer to as A1, then ask:

You are downloading information into this space which will hold it so that neither you, the facilitator, nor A needs to remember all of the detail. It will network together spontaneously when you reach the sweet spot.


To A1: 'And is there another space that you could go to which also knows about [the last thing they said] ?'

Wait until the client finds that space, which we shall call A2.

Repeat the same questions until A reaches a space that has changed, resolved or reframed the relationship of A to B. If you are not sure about finishing, you can ask this question:

To A6-An: 'And is there another space that would like you to go to it before we begin the finish?'

You can check that A's relationship to the problem or goal has changed by asking A to find a space that best represents what they know now and to rewrite or redefine what B is and where B should be placed. We hope that the feedback that you get from A will reward you for the discipline in using A's intuition to create an emergent knowledge solution.

If the client's issue can be thought of metaphorically as an egg type problem, then conventional knowledge processes look for an egg type solution. The application of the emergent knowledge system creates a non-ordered, non-linear small world network of seemingly unrelated, irrelevant, red herring type data points that coalesce at a sweet spot, in which the mantle of a non-scaling, profound knowledge experience changes the very core of the client. In this moment emerges a new world order solution, one which confers the wisdom of a chicken's cosmology rather than that of the egg. Hence, emergence creates opportunities to solve egg type problems with chicken type solutions.

Emergence creates boundary conditions by laying the problem out in space and engages the individual's intuition as the primary guide to finding a solution. The facilitator stands outside of this process and does not add, comment, discuss or analyse any of the ensuing content. The facilitator is engaged at the operating systems level, maintaining the iterations of the process independent of the content. Emergent Knowledge holds that the expression that is inherent in the nature of the problem also contains everything that is necessary for its solution. Conventional knowledge moves you from A to B and is goal oriented: Emergent Knowledge changes both the nature of the person at A and the nature at the problem or goal at B, such that, to a new world order, getting from A to B is completely irrelevant.

An emergent solution is one that is evidenced by a natural state of being in which mind, body, soul and spirit are of one accord, allowing the unexpressed shadow side of knowledge to have equal congress with the socially acceptable expression of the problem. When completed, an Emergent Knowledge solution has a natural and congruent fit for the person and does not require the physiology of effort, such as practice or reinforcement or dint of will to maintain the solution.

Until his untimely death in 2008 David innovated numerous therapeutic methods and he conducted training seminars in the USA, UK, France and in his country of origin New Zealand. In 1989 he co-authored with B.I. Panzer, Resolving Traumatic Memories: Metaphors and Symbols in Psychotherapy. He was the originator Clean Language, Clean Space, Emergent Knowledge and a host of other processes.

All information on this web site (unless otherwise stated) is Copyright © 1997- Penny Tompkins and James Lawley of The Developing Company. All rights reserved. You may reproduce and disseminate any of our copyrighted information for personal use only providing the original source is clearly identified. If you wish to use the material for any other reason, please get in touch via our Contact Form