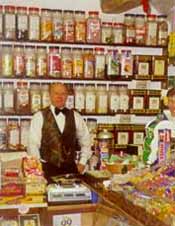 Like a kid in a sweet shop:
the use of generative metaphor

In a post to the Clean Language Discussion Group Mike Sands in Canada asked whether Symbolic Modelling, often described in a therapeutic context, could also be used as a catalyst for creative, inventive or innovative endeavour. In other words, can Symbolic Modelling be used generatively in a coaching environment. I am writing in response to that query.

As a coach who has been practising for more than ten years, I readily embrace Seligman's Positive Psychology Movement and have always held my coach/client sessions in a generative rather than a problem framework. This may be partly what has led me to work with a range of successful clients on a huge number of diverse goals and objectives. I believe the intention of the client/coach interaction is solely to keep the client moving towards clearly defined goals. Naturally, the biggest step forward is often to gain clarity on what those goals might be.

A guiding principle for me, as a coach, is to act as a facilitator and stay well away from consultant, advisor or trainer roles, and this is what attracted me to explore the possibilities offered through Symbolic Modelling using Clean Language.

I first encountered Symbolic Modelling when Penny Tompkins and James Lawley ran a two-day module at an NLP Master Practitioner course I attended. I must admit to having missed the point at first. This just seemed like another way of helping clients get clarity about problem states: it was only when I grasped the reality that my clients had always been using metaphor to understand and describe their goals that I realised the possibilities and signed up to further study.

Since then, Symbolic Modelling has proved to be a wonderful 'way in' to clients' generative potential; a way in for them that stays clear of any contamination from me, and my judgements about such things as the appropriateness of their goal.

One of the first times I worked in metaphor with a client to clarify a goal was in a sports setting when a professional rally driver needed to access their personal state of Flow. This performance state proved very difficult to re-access and articulate. However, their metaphoric landscape of the Zone of Flow proved rich with symbols. They reported a sense of knowing more, without necessarily understanding, about something that had been out of consciousness before. Further work followed, but I think it's no coincidence that they went on to win the championship - by frequently being able to get 'into the zone'.

Over the past few years I've had the privilege of working with Heston Blumenthal, whose restaurant, The Fat Duck, has been named the best restaurant in the world by The Restaurant magazine. Heston is a highly creative and original chef, renowned for re-thinking the way that we experience food, and developing dishes such as egg and bacon ice cream, and snail porridge. In addition to its normal kitchen, where customers' meals are prepared, The Fat Duck has an experimental kitchen, where Heston tries out his latest ideas, and puts his belief in molecular gastronomy - the application of scientific knowledge to the cooking process - into practice. He has given me his permission to touch on that part of our work that has used Symbolic Modelling in a generative frame.

We have often modelled a 'metaphoric landscape' that represents Heston's desire to achieve a number of clear goals. I think it is no coincidence that in becoming really clear about his goals he has achieved international success, including three highly coveted Michelin stars, and an OBE in the most recent New Year's Honours list.

However lately Heston has found that success can be a distraction, taking time away from the process of developing a complete dining experience for his customers. As demands on his time grow, he has found that he needs to set aside specific time to be in his experimental kitchen. And while in that kitchen, rather like the rally driver's personal Zone of Flow, Heston has found he can use metaphor to re-access a uniquely personal performance state which allows him to design dishes that are setting the direction for the future of haute cuisine.

In our most recent work together we have used Symbolic Modelling to help open a doorway into his creative place which he calls 'The Sweet Shop'. This metaphor did not emerge out of a coaching session, but was one I heard him use when he was being interviewed by a group of NLP students. They asked how he developed his passion for cooking and I heard him answer "Once I get going I'm like a kid in a sweet shop." Since then, we have used Symbolic Modelling to explore this sweet shop. He discovered that there's an old-fashioned doorbell that rings as you enter the shop, and an infinite stock of sweets of all colours in jars that crowd the shelves. The store even has its own distinctive smell; the aroma of those sweets you may also remember from the 60s and 70s - Sherbert Dabs, Parma violets and Love Hearts . There's a cash till that rings behind open racks of sweets such as Banana chews individually wrapped in that familiar shiny paper. As he moves around lifting lids off jars, feeling the weight of coins in his pocket, key emotions arise: curiosity, excitement and anticipation.

Heston believes that eating is a multi-modal process, involving all the senses and emotions, so he has begun to actually 'physicalise' his metaphor to bring some aspects into reality. The first step was to create a physical representation of the metaphoric sweet shop as his own creative space in the experimental kitchen. He has installed a bell that rings as you enter, and the intention is to decorate the shelves with those distinctive sweet jars. In addition, a top perfume house has been briefed to identify the particular sweet shop smell so that it can be used in his kitchen.

This is only one way that the original metaphor of 'a kid in a sweet shop' has helped Heston gain more knowledge about his personal state of creativity. Now, because he also believes passionately that being a restaurateur is about sharing experiences with guests, his team of chefs are working on ways to build some of the sweet shop elements into the overall dining experience (aromas, colours, visual symbols) in order to elicit each diner's emotions of excitement and curiosity - so important to enjoying a visit to the Fat Duck.

I continue to use clean language to facilitate my clients' self modeling in a generative way because they gain so much from the process to lift their performance. Also it offers me a means of staying true to the coaching principle that my clients are the expert and I should add as little as possible to their inner world.

With thanks to Heston Blumenthal at The Fat Duck for openly sharing his sweet shop experience. www.fatduck.co.uk

Mike Duckett has a degree in psychology and is a member of the Occupational Psychology, Sports and Coaching Psychology divisions of the British Psychological Society.

As a certified NLP Coach, Mike's clients range from Chairmen and C.E.O.s to board directors to key operational staff from a broad cross section of industry sectors including pharmaceutical, IT, construction, commodity-trading etc.; in Europe, South Africa, and the US.

His private clients include World Rally Car drivers, martial arts exponents, golf professionals, actors and musicians. He can be contacted at: www.coachingforsuccess.co.uk

All information on this web site (unless otherwise stated) is Copyright © 1997- Penny Tompkins and James Lawley of The Developing Company. All rights reserved. You may reproduce and disseminate any of our copyrighted information for personal use only providing the original source is clearly identified. If you wish to use the material for any other reason, please get in touch via our Contact Form